In our first part we discussed the installation of Windows 8 on a desktop hardware. In this second part we will touch some aspects of the desktop user experience. Still keep in mind, that since the installation was using standard hardware with no touch-screen capabilities, we will not be observing the Metro style, multi touch characteristics, etc. The allegedly leaked list of all features, such as on http://www.winrumors.com/heres-a-list-of-300-windows-8-features-that-microsoft-didnt-show/ is so extensive that it cannot be even briefly commented. For our sysadmin purpose we will stick to some general considerations and settings.

If you installed the version without the developer tools you will be presented with the following or similar desktop after the logon.

The key tiles for the good old desktop design are “Windows Explorer” and “Desktop”. If you click on one of them you will be presented with an environment similar to Windows 7. As expected, all common applications are available there, for example regedit (with which we checked the build version 8102), msinfo32 and so on.

Still two aspects will make themselves noticeable immediately. The first is the “Start” button that does not list All Programs, System Control, etc. but rather returns to the Metro style home view: this is very irritating when you try to turn your PC off for example. The second aspect of the above limitation comes at hand when you try to start average desktop applications such as Paint, WordPad or Control Panel. In both cases you either have to run the command directly (for example Win-Logo + R; shutdown –s –t 0) or you will need to learn new shortcuts which are bringing you back to – partially blended – Metro style.

For example the fastest way for the shutdown is Win-Logo + I and then from the power icon to choose between shut down or restart. 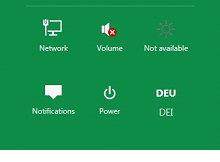 Similarly the only way to start an application with unfamiliar .exe name is to start a Search with Win-Logo + F and from there point to the application:

The experienced administrator is aware of the most useful names, such as compmgmt.msc or control or mspaint.exe but for the average user there will be a long learning curve. There are two abridged lists with keyboard shortcuts presented here, one in English: http://blogs.msdn.com/b/seealso/archive/2011/09/13/a-few-windows-8-keyboard-shortcuts.aspx and one in German: http://blog.tim-bormann.de/windows-8-tastenkombinationen.html

For web browsing a developer preview of Internet Explorer 10 is installed.

We will not be listing its capabilities here, from the GUI perspective nothing has be changed; the only difference in the settings we are aware of is the additional parental controls settings under the Content tab.

Please keep in mind that from the desktop version of IE10 is visually different from what you get under the Metro style.

Perhaps more interesting are the file format enhancements, part of it can directly be observed from Windows Explorer. Apart from the more or less cosmetic change to ribbon style, WE buries – finally – a native support for .ISO files. With a right click you become a Mount option. To unmount you will need to right click on the virtual volume and select Eject. The same applies to .VHD files, previously mountable only via diskpart or the disk manager.

Still we were missing a native integration of the PDF format and in many open source formats, such as FLAC.

Perhaps one of the most deliberate changes is the lately included “File History” functionality. Similar to Mac OS X Time Machine, it saves files in regular intervals and as such provides documents versioning. For this to work you will need a USB disk. As soon as you attach a USB device for the first time you are prompted with the following message:

If you click on that you have four options: open folder, speed up system, use as a file history device (blended out because we have already chosen that), and take no action.

After you have configured the USB disk for file history, under Control Panel the feature is already turned on. 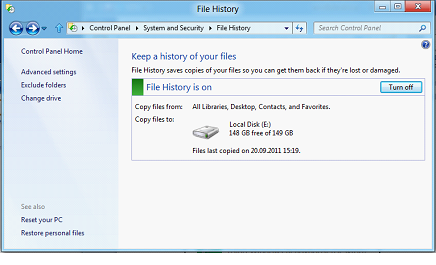 To fine tune the settings for your environment you have Advanced settings, Exclude folders and Change drive links. Specifically the first one can be of interest right on the start. By default the saved versions are kept forever and backup interval is every hour. The screenshot below represents values for frequent use.

As soon as multiple copies of the objects (folders, files and libraries) were saved you can use the right and left button to navigate between different times which appear above as title.

Of course there is fine grained recovery option for single items. In the example below only one document from the desktop is selected for recovery. 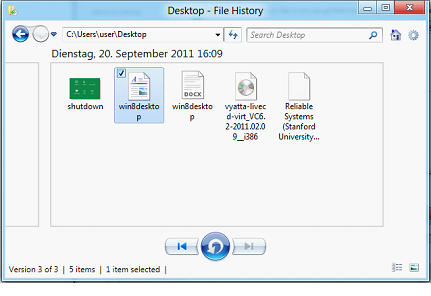 Last but not least you can select the way an item is being restored in case you already have an item with the same name on the destination folder. 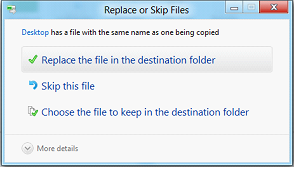 All in all File History is a feature improvement that we were missing a long time. Especially in cases where a user deletes objects by mistake the recovery is very fast and simple compared to the backup options presented with Windows Vista and Windows 7. On the other side this new feature lacks the graphical elegance of the Time Machine pendant, and is missing a preview for the documents.

The last feature enhancement, we are going to briefly comment here is the newly presented Hyper-V Core for the client OS. This component known to the sysadmins as a server role was catering for a virtualization application gap in the desktop OS for two generations already (Vista and 7). Many of these people, along with the developers and other enthusiast, hat to rely on third party products, particularly in cases where 64-bit virtual machines were needed.

We were expecting to present here cheerful news, and even go deeper in testing the promised data replication without the need of a SAN. But as usual Microsoft took care for a stunner: we could not install Hyper-V because the processor was not supporting SLAT. Allegedly to improve performance. We could have understood that in a productive environment or Release Candidate-stage, but to developers preview-stage such logic is unacceptable. A big disappointment! 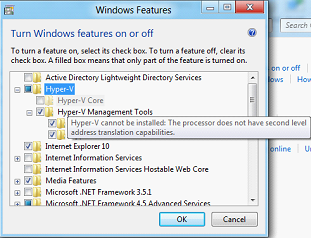 Windows 8 brings some long awaited improvements for its desktop layout on board. That is gratifying. Still there will be a learning curve for users accustomed to Windows 7 distribution, and even more disturbing are the compatibility issues, starting up with hardware compatibility and ending with a lack of native integration for open source file formats. One more negative point was the large fingerprint of the system with almost 10GB on vanilla install: this cannot be tolerated for compact devices such as tablets. We are asking ourselves if this dual-personality concept is justifying the monstrous file occupation. It goes definitely in trend with the Android tendency to combine smartphone and tablet versions in one product, but every trend in the world should be blindfolded copied. As unabashed our prediction might sound, if Microsoft is not considerably changing the product in the next one year before its commercialization, it could follow Vista’s fame.

This site uses Akismet to reduce spam. Learn how your comment data is processed.